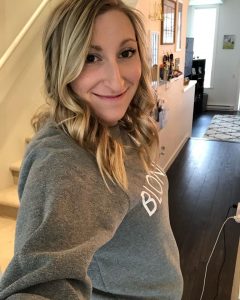 When I look back to my pregnancy journey I’m disappointed. ⁣
⁣

Before I was pregnant I would make comments about how I wouldn’t get upset about gaining weight while pregnant.

Don’t get me wrong, I do understand that these are some of the ways they measure mine and my babies health.

But, how can they do that properly without asking me about my lifestyle?

About my activity levels?⁣
⁣

Nothing healthy is going to come out of shaming anyone on their body. ⁣
⁣

Although I went to the gym every day I could while pregnant, ⁣
⁣although my job is very active, ⁣
although my diet stayed relatively the same…⁣⁣
⁣⁣
I still gained more than the suggested amount and was shamed for it. ⁣⁣
⁣⁣

When I didn’t loose weight in the first 6 weeks the doctor made me feel like there was something wrong with me. ⁣⁣
⁣⁣
No one respected that my journey is different.