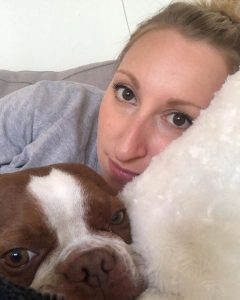 Let’s talk depression… ⁣⁣
⁣⁣
When it comes to our mental health we’re definitely starting to understand and accept it. Although we seem to do it in waves rather than just constant. ⁣⁣
⁣⁣
What I mean by that is we choose what aspects we’re going to talk about mental health & what topics it’s allowed to pop up in. I struggled a lot with this. ⁣⁣
⁣⁣
I was constantly talked to about post partum depression while I was pregnant meanwhile no one even saw that I was truly suffering from anxiety & depression during my pregnancy that actually subsided when I gave birth. ⁣⁣
⁣⁣
Post partum depression is real & deserves to be talked about. But same with depression during pregnancy, or depression during any point in life. We need to stop focussing in on one aspect & accept the reality of it. ⁣⁣
⁣⁣
Anyone can get depression at anytime. ⁣⁣
⁣⁣
I felt so alone. I had wanted a baby for so long. It was a constant conversation between my husband and I. When we discovered I was pregnant I was through the moon & wanted to tell everyone. Then slowly that excitement changed to depression. ⁣⁣
⁣⁣
I think it started when I was so weak I could hardly get off the couch. I had no appetite & was ghost white when I walked from the living room to the kitchen. I went from working out 6 days a week and working 4-5 days a week to not even being able to get up off my couch. ⁣⁣
⁣⁣
Exercise is everything to me. It balances my mental health. It’s such an outlet for me and at the single biggest change in my life I didn’t have that one thing I needed. ⁣⁣
⁣⁣
It got worse from there all the way until I had my son. I felt 1000lbs get lifted from my shoulders. Now that I’m almost completely done breast feeding I’m feeling that same amount of weight getting lifted again. Almost 4 months post partum and I’m finally starting to feel like me. Feel my personality come back. ⁣⁣
⁣⁣
The holidays are hard. The end of the year. End of a decade. Beginning of a new year are all hard. If you feel someone is “off” or not their normal selves check in on them and when they say they’re “ok” dive deeper. Offer support, check in tomorrow. Don’t give up because they need you. ⁣⁣