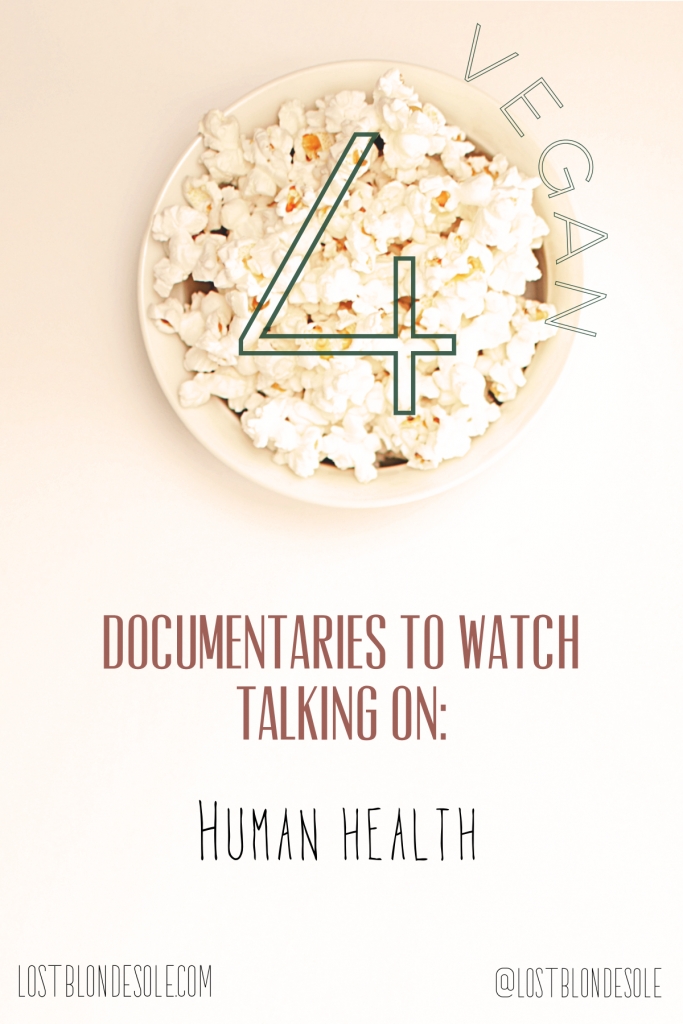 We are surrounded by information these days, from Facebook, Twitter, Instagram, TV News, News Apps, Google etc. Then; you have to question if it’s a reliable source, is the study sponsored? I’ve had a number of people reach out to me to discuss either a documentary they’ve seen or to get some recommendations. Knowledge is not only powerful, but also addicting. That’s why I wanted to create posts categorizing and outlining the best vegan documentaries to watch.

How it Started for us

After watching Forks Over Knives I became absolutely addicted to watching documentaries, but this was back in 2011! Netflix was a brand new thing. We were in the middle of transitioning from DVD’s, Blu-Rays and Cable TV to streaming services. I didn’t know where to look and it was costly because you had to rent them all from different places. 8 years later,  we almost have the opposite problem! There’s almost too many options and its overwhelming rather than underwhelming.

This is where this post comes into play! Because there are so many out there, I wanted to compile a list of some of my favourite documentaries but thought I would categorize them by:

I decided to start with Human Health first. Unfortunately we aren’t taught a lot about proper diet and nutrition. We rely solely on what our government is *telling us through our physicians and educators. I read somewhere that we should look at professionals and the information they give as the seasoning. Our body, mind, soul, intuition and instinct is the meal. We know ourselves best and its important to listen to our inner self first.

The other reason is that humans are selfish. There I said it.

We don’t want to do anything that doesn’t benefit us directly. This doesn’t mean that we never make sacrifices, of course we all do! But, if there is one thing I have learned from our families journey to veganism along with sharing our journey openly — is that we have to open the door to change first, and then show; that although change is different, different CAN be ok, and even sometimes, it can be better. 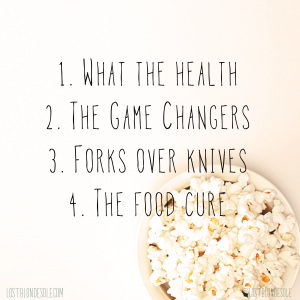 So I’m going to ease you in with the most recent and probably one of the most talked about vegan documentaries to date. This documentary holds a special place for our family as it was the documentary that was able to shift my husband into veganism. I will never forget when the credits started to slowly take over the screen, bringing the documentary to a close, turning to my husband and witnessing him start to spiral into the idea of going vegan. We can save that story for another day though 😉

You can find this documentary on Netflix or you can rent it for $3.99 on YouTube. The Game Changers has some big names behind it too — like Arnold Schwarzenegger, Jackie Chan, Lewis Hamilton and Novac Djokovic alongside many more NFL players, Olympians, Ultramarathon runners etc.

The directors and producers idea was to debunk the century old myths that you can’t get enough protein, can’t build big muscles and just generally are unable to achieve optimum physical health on a plant based diet. These were my husbands greatest concerns and he ended up switching, so I’d say they did a pretty good job!

A follow up to the documentary Cowspiracy (amazing documentary that I will be talking about in my second post on the environmental affects).

What the Health takes a look at how we can change the way we look at chronic diseases and what we can do to help prevent and reverse their affects. The documenter also looks into why our governments hide the truth from the masses and the corruption behind pharmaceuticals and animal agriculture.

Its truly an eye opening and shocking documentary to watch that will shift all the knowledge you know about chronic illnesses.

This documentary has a very similar agenda as What the Health. They dive deep into how our food choices affect our health and how adopting a plant based diet can reverse chronic illnesses like Type 2 Diabetes.

They follow two doctors journeys in research who end up at the same final conclusion: that chronic diseases can be prevented and at times reversed when adopting a plant based diet.

You follow along a number of patients journeys and watch as their health improves and they begin to lessen the number of prescription drugs they take on a daily basis.

You can watch it on Amazon or on iTunes.

This one is intense. The Food Cure takes a look at treating people with cancer differently. Rather than the traditional method of chemotherapy where they kill the cancer cells; which in turn kills vast majority of the healthy cells in the body they look at strengthening the natural immune system. This is done through diet so our body can naturally fight off the cancer cells.

Its not just a basic plant-based diet though. The cancer patients must follow an intense 2 year diet plan called the Gerson Therapy method diligently. This includes a variety of changes to daily life like: multiple daily coffee enema’s, all natural cleaning products and organic fruits and vegetables.

They follow a number of patients ranging in age, cancer type and location in the world. In this documentary they show their true honest journey in fighting cancer not using the traditional chemotherapy method.

You can find it on iTunes, Google Play, VuDu, YouTube and Xbox.

In conclusion, there are so many great documentaries out there. This is just a list of my 4 favourites that speak on the affects of human health. Stay tuned for my next post where I will share my favourite documentaries that discuss the environmental impact our food has.

If you’re wondering what you can do today to make an impact; check out my post 5 Ways to make an Impact Today